Which Cleanroom Design do I Need?

The type of Cleanroom you need is mostly dependent on whether you need a more isolated environment with strict temperature and humidity control or not.  In a Single Pass design, air is filtered into the cleanroom and passed out to the surrounding environment.  In a recirculating air design, the filtered and conditioned air is continuously recirculated back through the system maintaining a steady temperature and humidity level for greater control of the controlled environment.

How Important are Cleanroom Airflow and Air Changes per Hour?

Correctly designed and engineered cleanroom airflow and air change rates are the heart of the cleanroom envelope, and are key to ensuring compliance with ISO, FDA, cGMP, and USP 797 regulatory standards. Airflow and air change rates can also greatly impact operational and maintenance cost and requirements, depending on what type of cleanroom (single pass or re-circulating) is right for your application and where the system will be located.

For ISO Class 9 through Class 6 cleanrooms, ACR is calculated by air changes-per-hour; for Class 5 through Class 1 cleanrooms, ACR requirements are measured in meters per second of airflow. For example, an ISO Class 8 cleanroom requires a minimum of 10 air changes per hour—the air inside the cleanroom will be entirely “new” every six minutes or less. In a Class 5 cleanroom, air must travel through the room (from the filter input to the exhaust ports) at no less than 40 feet per minute.

In addition to particulate levels, airflow and air changes rates will also determine the temperature, relative humidity, heat load, static, and gradients of your cleanroom. These factors depend on the percentage of treated conditioned air introduced, the number of times the air is changed, and the total heat load of the cleanroom environment—including personnel, process equipment, lighting levels, and the type of HEPA filtration modules utilized.

What Type of Cleanroom HVAC do I Need?

Designing and engineering your cleanroom’s air handling systems correctly the first time is always less costly than attempting to repair an incorrectly-designed cleanroom HVAC system or retrofitting a system after the fact. Ambient air temperatures, relative humidity, and pressure should be measured and documented over a twenty-four hour period. When attempting to rely on a single pass ambient air controlled cleanroom enclosure for environmental tolerances, depending on process equipment, function, and number of personnel, it is possible that the cleanroom environmental conditions will run higher than those of the ambient area outside. These environmental conditions can ultimately lead to contamination with fungus and microbial growth, as well as rust particulates that may be generated by any metal surfaces. 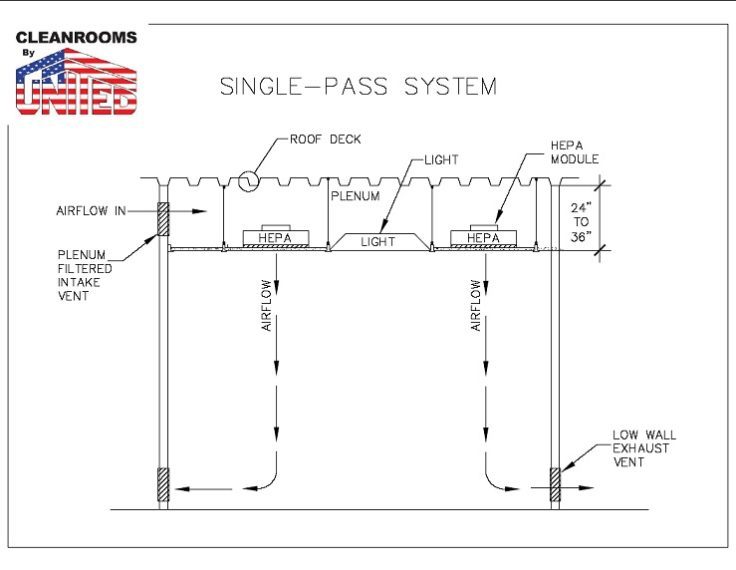 Using HEPA FFUs (fan filter units), air is introduced into the ceiling plenum using filtered attic air intake vents to pull in ambient or conditioned air. In a hardwall single pass cleanroom, air is exhausted out through low wall exhaust grills and back into the ambient (outside) environment; in softwall single pass cleanrooms, air is typically exhausted under the vinyl curtain.

HEPA modules in our single pass cleanroom systems feature variable speed controllers from 200-850 CFM to ensure that air change rates meet the required classification level. The cleanroom must also be conditioned low enough to offset the heat loads of the HEPA fan filter motors, light fixtures, process equipment, air change rates, and the number of personnel inside the work envelope. 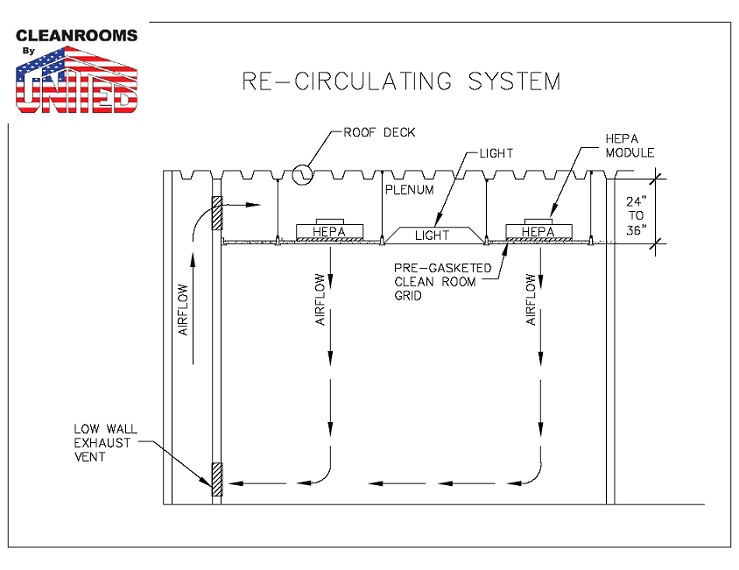 Recirculating cleanroom airflow systems filter air through a dedicated air handling system specifically designed and engineered to maintain the cleanroom at the required operating environmental tolerances. Re-circulating airflow systems offer temperature, relative humidity, and pressurization controls through an interface on the air handling unit itself. These systems are typically paired with static HEPA filtration modules instead of fan powered modules.

Unidirectional airflow inside a recirculating cleanroom can be achieved via careful placement of HEPA filtration modules and low level returns, which direct airflow and heat load removal in areas of the cleanroom environment that require higher airflow. In some cases, lower ISO-class recirculating cleanrooms can also be filtered via HEPA units in line with the supply air from the HVAC system, rather than ceiling mount modules. This helps reduce cost and maintenance requirements in the future.

Automated Control Systems apply to all classes of cleanrooms, and all industries would benefit from ACS to maintain a precisely controlled environment. While Automated Control Systems aren’t considered a standard included feature, they are highly recommended on any system with 20 or more HEPA units. ACS can also be used for both single cleanroom installation or across multiple rooms, zones, or addresses.

Automated Control Systems have multiple options for cleanrooms including:

Turn to Cleanrooms By United for the cleanroom solution you need. We will work with you to determine whether a single pass cleanroom or re-circulating cleanroom is right for your unique application.

Request a quote or contact us to get your cleanroom project started today.